I know that it has been a while since my last post, but things have been pretty crazy with anticipation of mainnet release.

We are still on testnet but an announcement will be forthcoming shortly.

A lot of people, including myself, have been reporting issues with peers exceptions on their nodes that are running both IPv4 and IPv6. It looks like that once in a 24 hour period they will see the following dreaded information in their console for their tracker:

Then the following is observed in their debug.log file at the same time stamp:

Initial testing by myself found that when I limited the node to IPv4 only in the zen.conf then these errors no longer occurred, and subsequently no longer got the peer exceptions. Independent testing found similar results.

I would like to have further people try this fix to see if it resolves their peer exceptions.

Stop your zend daemon, and edit your zen.conf using your favourite editor, mine is nano so the command is:
nano ~/.zen/zen.conf

Then restart your node.

To verify that you are only running IPv4, when you run zen-cli getnetworkinfo you should see something similar to this: 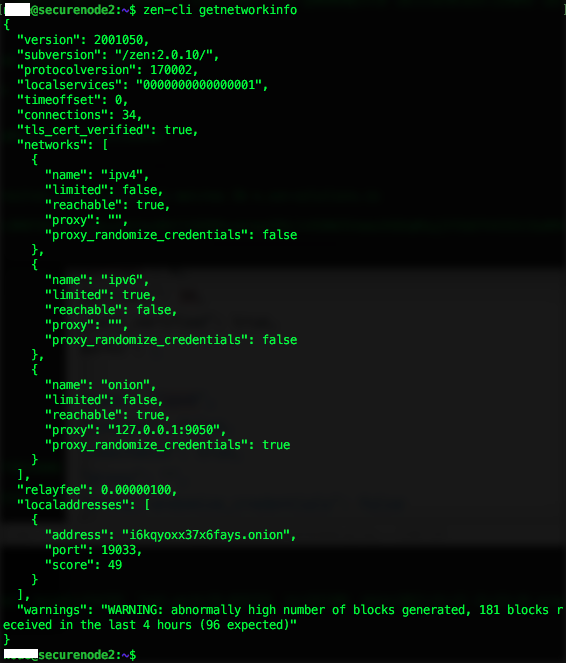 If you find this blog useful, and if you would like to keep it up and running, donations are always appreciated to any of the following addresses:
ZEN: znYjefe2QBfm9HEWfAtpwiBHMHTXwePs48C
ZEC: t1YZxjMEmPPLx1kFVp2zcWRBC4zrmRc71eZ
BTC: 14D1emX2xDeh3zA2myrhCmaWf1ZKAn1QzS
ETH: Ae491f4493F8d051ac23cE0d4aa2B524504eCb84

Written in collaboration with: Johncarlo Maddalena